The year after the mosaic’s discovery in 1963, British Museum curator Kenneth Painter carried out a limited excavation in the field behind the blacksmith’s forge in order to identify the extent and nature of the buildings it had belonged to.

Painter opened 18 narrow trenches of various lengths, which he suggested showed that the mosaic floor had originally furnished a pair of rooms in an apparently substantial building complex that flourished in the 4th century.

Painter expected the building complex at Hinton St Mary to be similar in plan to a typical late Roman ‘courtyard’ villa, of which many impressive examples are known in Britain, and his excavation duly located possible evidence for 3 ranges of rooms or wings around a central courtyard, with a boundary ditch on the 4th side. Trenches over the tessellated room, as well as in its immediate vicinity, uncovered the mosaic but did not prove that these rooms had been part of a long range. Remains of a side wing was found only on the northwestern side, consisting of, it was suggested, a long stone building approximately 10m wide with crude tessellated floors decorated with simple geometric patterns (‘Area 1’). Although the evidence for the two side-wings was very limited and did not fit well with the interpretation of a high-status building, this was explained as the result of extensive stone robbing in the centuries after the Roman period. 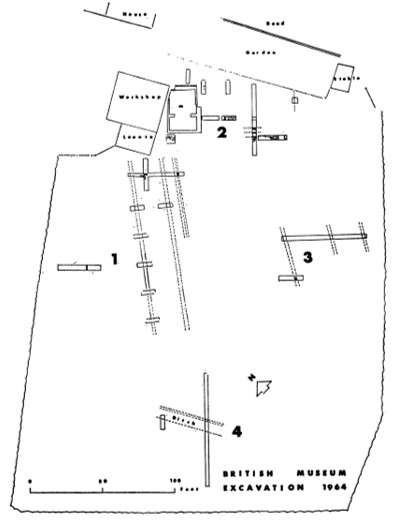 Painter was aware that his initial excavations had failed to answer many of the basic questions about the mosaic’s immediate surroundings, and his short published reports show that he was not entirely convinced that the site should be called a Romano-British villa. Unfortunately, his plans to return to Hinton St Mary to carry out further investigations did not materialise and these questions remained unanswered. However, the notion that it was a courtyard villa took hold and had become accepted by the time English Heritage (now Historic England) undertook geophysical surveys of the field in 1996 (by then a Scheduled Monument). 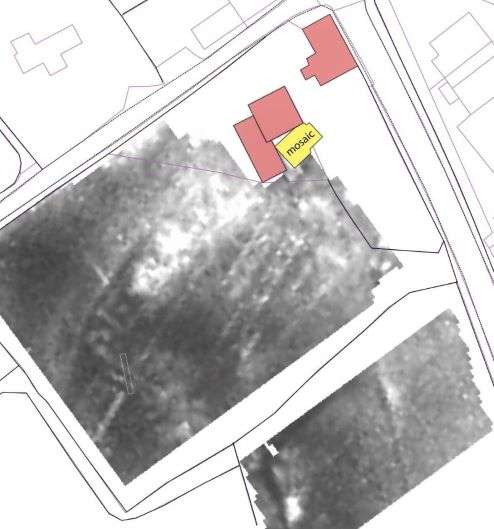 Magnetometer and resistivity surveys indicated the presence of detectable archaeological remains, especially walls and ditches, in most of the field as well as beyond the scheduled area to the south-west. Although interpretation of the geophysical results was complicated by widespread contamination from modern activities in the northern part of the field, the surveys seemed to confirm the layout of Roman buildings as proposed after the 1960s excavations. However, the resistivity survey in particular indicates that the site at Hinton St Mary is likely to be more complex than was originally thought – the building with the mosaic floor seems to lie in front of three long rectangular structures that extended downslope, but it was still not certain if the rooms were part of a larger building or stood more-or-less alone.

Geophysical techniques are very effective at locating subterranean archaeology, but they cannot tell us about the histories of buried buildings and settlements, or the activities that might have taken place in them. Only the physical examination of archaeological remains by excavation can generate the evidence to explore such questions, which is why the British Museum proposed returning to Hinton St Mary in 2021.