The mosaic from Hinton St Mary is among the most celebrated and remarkable survivals from the Roman period. Measuring 8 m by 5 m, the tessellated pavement covered the floor of a large double room. The mosaic is mostly made from local yellow, brown, dark grey and white stones, as well as pieces of red tile set into a thick bedding of mortar. It was made by mosaicists who operated in the area around Dorchester in the 4th century, and it has been suggested that parts of the mosaic were prefabricated offsite before being brought to Hinton St Mary. 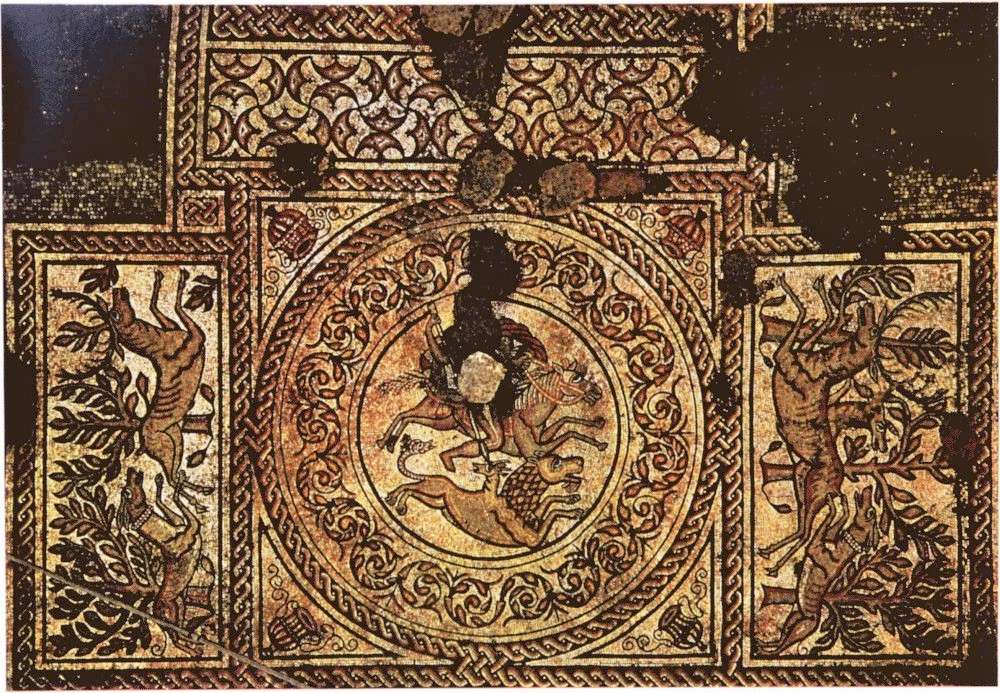 The unequal parts of the mosaic both comprise central roundels surrounded by rectangular or semi-circular panels, separated by bands of guilloche (twisted plaits). The roundels face in opposite directions and we do not know how people would have entered, or used, the rooms.

The smaller room is perhaps an antechamber and it’s roundel shows the pagan hero Bellerophon riding on Pegasus and about to spear the Chimaera (a monster with a lion’s head, a goat’s head on its back, and a tail ending in a serpent’s head). Inward facing scenes of collared dogs hunting stags in woods fill the panels to either side.

The central roundel in the larger room shows the bust of a man wearing a tunic and cloak, flanked by pomegranates and with the Greek letters X and P (Chi and Rho) behind his head. Lunettes against the room’s walls also show hunting scenes of dogs chasing deer as well as a spreading tree, though this time facing outwards (i.e., away from the roundel). Busts of men with red cloaks occupy quarter-circles in the four corners – two with pomegranates and two with rosettes by their heads – who might represent the pagan Four Seasons or Winds.

Chi and Rho are the first two letters of the word ‘Christ’ in Greek (ΧΡΙΣΤΟΣ) and, when amalgamated like this, became a well-known symbol of Christianity and of Christians. Scholars have suggested the figure in the centre of the larger room is one of the earliest representations of Jesus Christ from the ancient world, and probably the first to be placed on a mosaic. 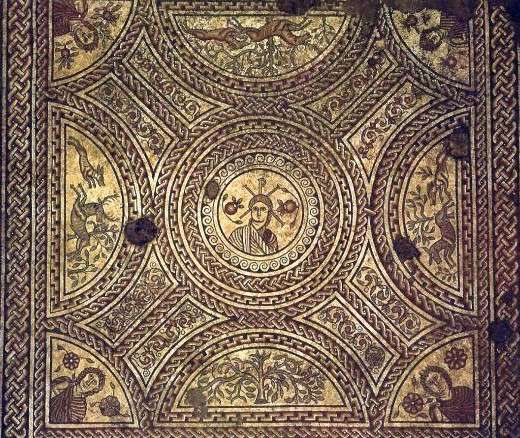 This identification seems to be supported by the flanking pomegranates, which were symbols of immortality at the time and are believed to represent the Christian promise of eternal life. Continuing this theme, some people consider that the busts of men in the corners might represent the four evangelists – Matthew, Mark, Luke and John.

However, late Roman depictions of Christ usually show him with a nimbus (halo) behind his head, an important symbol of divinity that is missing from the Hinton St Mary mosaic. Others have wondered if it would have been even considered appropriate for an image of Christ to be included on a floor for anyone to walk over (although pagan gods are often shown on mosaic pavements). If the figure is not Christ, some people have suggested the bust could be a Christian Emperor such as Constantine the Great (in which case the corner busts might represent his four sons), or the later usurper Magnentius, some of whose coins bore the Chi-Rho symbol prominently on their reverses. Constantine decriminalised Christian worship in 313 (he only converted on his deathbed in 337) and the figure’s distinctive cleft chin is shared with other portraits of Constantine (and Magnentius too), although it would be highly unusual for a floor to carry an imperial bust.

Despite a great deal of informed speculation over the past 60 years or so, we do not know the identity of the man in the main roundel. Indeed, it is perfectly possible that there are other explanations – perhaps he was the Christian villa owner himself, or another important figure in the early Christian community in this part of Roman Britain. Understanding if the mosaic was part of a high-status villa or another type of building is a good way of resolving this important question. This requires a better appreciation of the buried remains at Hinton St Mary, which is something only archaeology can provide.